The Manhattan Regional Airport welcomes travelers with a 42,000-square-foot terminal design that celebrates the scenic Flint Hills. The terminal provides sustainable features and supports an expanded large charter and commercial air service. The new facility, which is three times the size of the previous, features regionally inspired design with the curved roofs reflecting the area’s rolling hills and locally-sourced limestone shown throughout. Inside the terminal, cloud-like, metal ceiling panels replicate the uplifting feel of the exterior roof. The extensive use of glass provides abundant natural daylighting and outward views that assist with wayfinding.

The new $17 million passenger terminal consisted of nine separate projects financed with local, state and federal funding. The complex phasing included parking lot expansions and two major phases for the terminal. The first phase demolished a third of the existing terminal and built half of the new terminal. The second phase demolished the remainder of the existing terminal and completed the new terminal. All of this work was done while maintaining continuous operation throughout the project’s duration.

"The airport is the front door of the community. Whether arriving or departing, the public is now greeted with a gorgeous state-of-the-art facility that represents the Flint Hills region." Secondly, “Enhancing our security operations was an essential part of the overall project. With two X-ray machines and a body scanner, MHK's new checkpoint is capable of running two concurrent screening operations.”
Jesse Romo, Airport Director
Manhattan Regional Airport
“Phasing for this project was difficult. Tearing down and building half, before we tackled the other half was unusual. And, throughout we had to make sure the safety of terminal users was maintained. Mead & Hunt’s project management, excellent communication and detailed documents were instrumental in the success of the project. Despite delays and other challenges, we were able to deliver a project that made the client happy and our team proud.”
DJ Van Etten, Project Manager
The Weitz Company 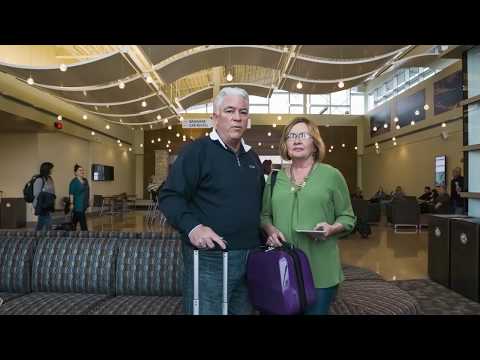 Check out the airport produced commercials which feature the terminal

More on this Project