“Of Exceptional Significance”: Prince and the National Register of Historic Places 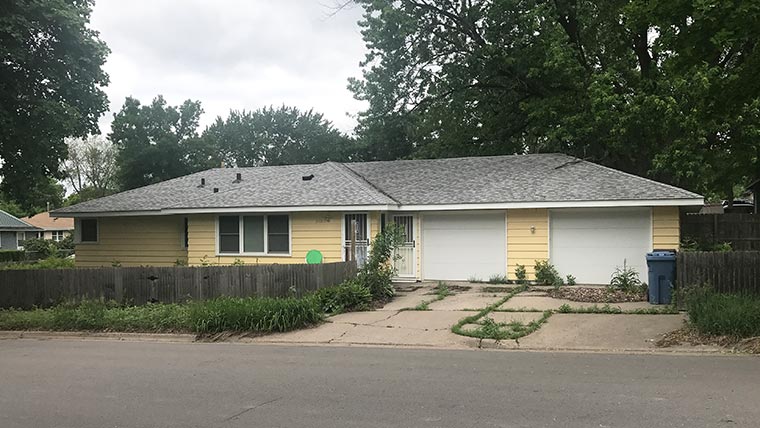 Prince’s childhood home at 2620 8th Avenue North in Minneapolis, now eligible for listing on the National Register of Historic Places

In celebration of Black History Month, we are continuing our series on diversity and inclusion in the National Register of Historic Places and how research into places associated with Minnesota’s most famous star has been a small step in diversifying the places we deem to be historic.

I am a big Prince fan. Certainly not the biggest or the most knowledgeable, but since I saw his video for ‘Little Red Corvette’ on MTV in 1982, I was hooked. When he tragically passed away in 2016 from an accidental fentanyl overdose, like many people around the world whose lives were impacted by him, I was devastated. My grief soon transmuted to an overwhelming need to do something. With no real artistic or musical abilities, which was the focus of most immediate tributes, I struggled to find a productive means to channel my sorrow. Fate intervened, as it often does in people’s stories about Prince—I read an article showing the location of his childhood home where he wrote his first song, “Funk Machine,” at age seven. As a historian and preservationist, I decided to study his childhood home at 539 Newton Avenue North to determine if it was “historic” within the requirements of the National Register.

Others had a similar idea in seeking historic designation to honor Prince’s legacy. Petitions circulated on social media immediately after his passing to have his artist compound Paisley Park (built in 1987 in Chanhassen, Minnesota) designated a National Historic Landmark, the highest level of historic recognition and protection. Paisley Park truly deserves that honor, due to its long association with Prince. I believed, however, that the places that led him there were equally worthy. My concern was that if the only Prince property left in one hundred years is his gleaming white utopian palace in a far southwestern suburb, his connection to “The Minneapolis Sound” will seem odd and out of context. Put another way—while others sought recognition for the place Prince made, I sought recognition of the places that made Prince.

The study of his reported childhood home quickly proved to be more challenging than I anticipated. Perhaps I should have known better. As Prince himself stated,

“…so much has been written about me and people never know what’s right and what’s wrong. I’d rather let them stay confused.”

It turned out that, based on property deeds and city directory listings, the house on Newton was not his childhood home, but rather where he lived briefly with his father when he was a teenager. With a mystery now in hand—where was his childhood home?—I decided to research, fact-check and clarify Prince’s journey from Minneapolis’ Northside to Paisley Park, from his childhood through his peripatetic teenage years through his rise to international fame. It has been a fascinating and revealing excavation that challenges long-held narratives and perceptions about Prince and his beloved, but troubled hometown. I documented Prince’s extraordinary significance in history since most places associated with him were less than 50 years in age; anchored his life within broad historical events; identified the correct locations and dates of his associations with over 50 properties along his historic journey; and established criteria by which such places can be evaluated for historical significance. This work proved to be even more critical than I thought it would be when I began, since over half of the properties I identified were either demolished or so dramatically altered that they lacked any integrity from the time of his association with them.

In addition to recording of correct locations and dates which I use to lead tours, the study justified National Register eligibly for two key Prince properties to date. Using property deeds and city directories again, his childhood home was found—a modest rambler at 2620 8th Avenue North where Prince lived from ages 6 to almost 12—and is now recognized as historically significant since it was the location where he mastered the piano and developed his songwriting, performing, and singing abilities (though no one I interviewed remembered a song called “Funk Machine”). In addition, I recently wrote the nomination to recognize Sound 80, Minneapolis’ premier recording studio during the 1970s, as historically significant for its association with Prince (as well as other artists) since it is where Prince honed his studio recording techniques, “got hip to Polymoogs” and LinnDrum machines which became key elements in his Minneapolis Sound aesthetic, and recorded the demo tapes which landed him his recording contract at 19 with Warner Bros and parts of his debut album, For You (1979).

Having these more modest, lesser-known properties be the first to obtain historical designation is fitting—the places that made Prince deserve and need to be recognized for their historic importance to keep his legacy connected to his Minneapolis roots. The process resulted in one other major revelation for me—that the recognition of these two properties doubled the number of historic properties associated with African American history in Minneapolis, a shameful statistic considering the hundreds of National Register properties associated with white people in the city. In 1987, the year Prince opened the place he created, Paisley Park in Chanhassen, he reflected on his hometown of Minneapolis, stating

“I’m as much a part of the city where I grew up as I am anything. I was very lucky to be born here because I saw both sides of the racial issue, the oppression and the equality.”

It is perhaps fitting then that his legacy continues to shine a light on racial issues, including within the processes that determine what is of value to our history.

Kristen is a Cultural Resources Specialist with over 30 years of experience; exceeds the Secretary of the Interior’s Standards in history, architectural history, and archaeology; and has a strong background in the regulatory processes, having led the Cultural Resources Unit for the Minnesota Department of Transportation (MnDOT). Her true passion is music history and connecting people to the places associated with their favorite singer, song writer, or sound. She is currently overseeing the research, survey and writing efforts for a statewide Latinx Multiple Property Document Form for the Nevada DOT as well as historic contexts for many historically marginalized groups along the I-94 corridor in St. Paul and Minneapolis. Kristen is also a member of Mead & Hunt’s Underrepresented Resource Group initiative.