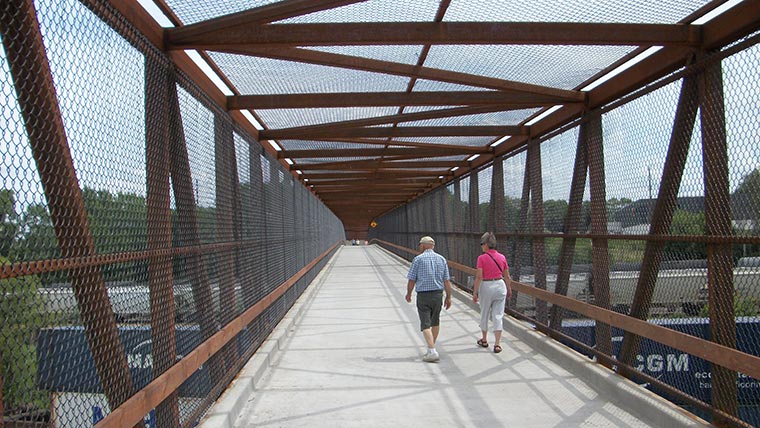 Envision a train whizzing by as you cross an active railway that stands between you and your home. Maybe you were shopping, working at an industrial center or attending the nearby high school. For many citizens in La Crosse, Wisconsin, this has been a reality for many years.

The original Bud Hendrickson Trail, located along the BNSF Railway on La Crosse’s north side, was nearly two miles removed from the nearest railroad crossing. For years, the BNSF Railway Company and the City of La Crosse noticed pedestrians and cyclists trying to cross the active rail yard to reach their destination. La Crosse realized they needed to resolve this situation in order to keep their citizens safe.

Nearly 15 years in the making, the City of La Crosse, with Mead & Hunt leading the design efforts, recently completed the new and improved Bud Hendrickson Memorial Natural Trail and Pedestrian Bridge. The project included 1.5 miles of new paved trail and an 839-foot pre-fabricated steel, bike and pedestrian bridge that links the residential neighborhoods on La Crosse’s north side to the Great River State Trail and the nearby shopping centers located just across the railroad yard.

Due to the project’s location, stakeholders and safety concerns, Mead & Hunt placed a high priority on public involvement. We worked alongside the city to create a safe pedestrian bridge for pedestrians and cyclists so they could enjoy all their city has to offer.

Our project team was sensitive to the community’s concerns. A number of people in this heavily-populated area were affected by the additions. Long segments of the new trail are located adjacent to residential back yards. Due to the expansion of the railroad yard, the bridge design was forced to change several times which lengthened the schedule by several years. Many of the stakeholders and property owners changed several times which added to coordination effort.

Citizens wanted to know about lighting conditions, safety, cleanup and maintenance, access and notification of the bridge’s construction schedule. Business owners were concerned that people would park in their private parking lots before crossing the bridge to the shopping center.

Our team and city staff responded to public inquiries and concerns. The design took into account safety, fencing and lighting requests by the public. Signage was included to identify the trail and to keep motorists off the pedestrian pathway. The plans also included dedicated access points and haul routes to minimize impacts to the neighborhoods.

Mead & Hunt was involved in two public involvement meetings and countless property owner, business owner and utility meetings. Team leaders were in constant contact with the City of La Crosse, the Wisconsin Department of Transportation, the BNSF Railway Company and state and federal agencies.

The bridge and trail is now opened to the citizens of La Crosse. They can enjoy the best of their city without putting themselves in danger by crossing the railroad tracks. 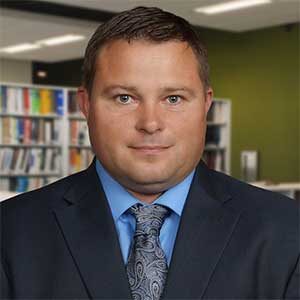 Jay is a transportation engineer with a wide variety of construction management experience from two-lane rural highways to complex urban streets, as well as freeway and bridge projects. Jay is committed to providing high quality work exceeding clients’ expectations.